Special gift for a special friend.

So I can finally reveal what I have been working on for my World Cup Craft project and why it was so fitting. My very good friend Bekki spent a few months of last year travelling round Asia and Australasia, so as her (very late) birthday present I embroidered a cushion with all the countries she went to. 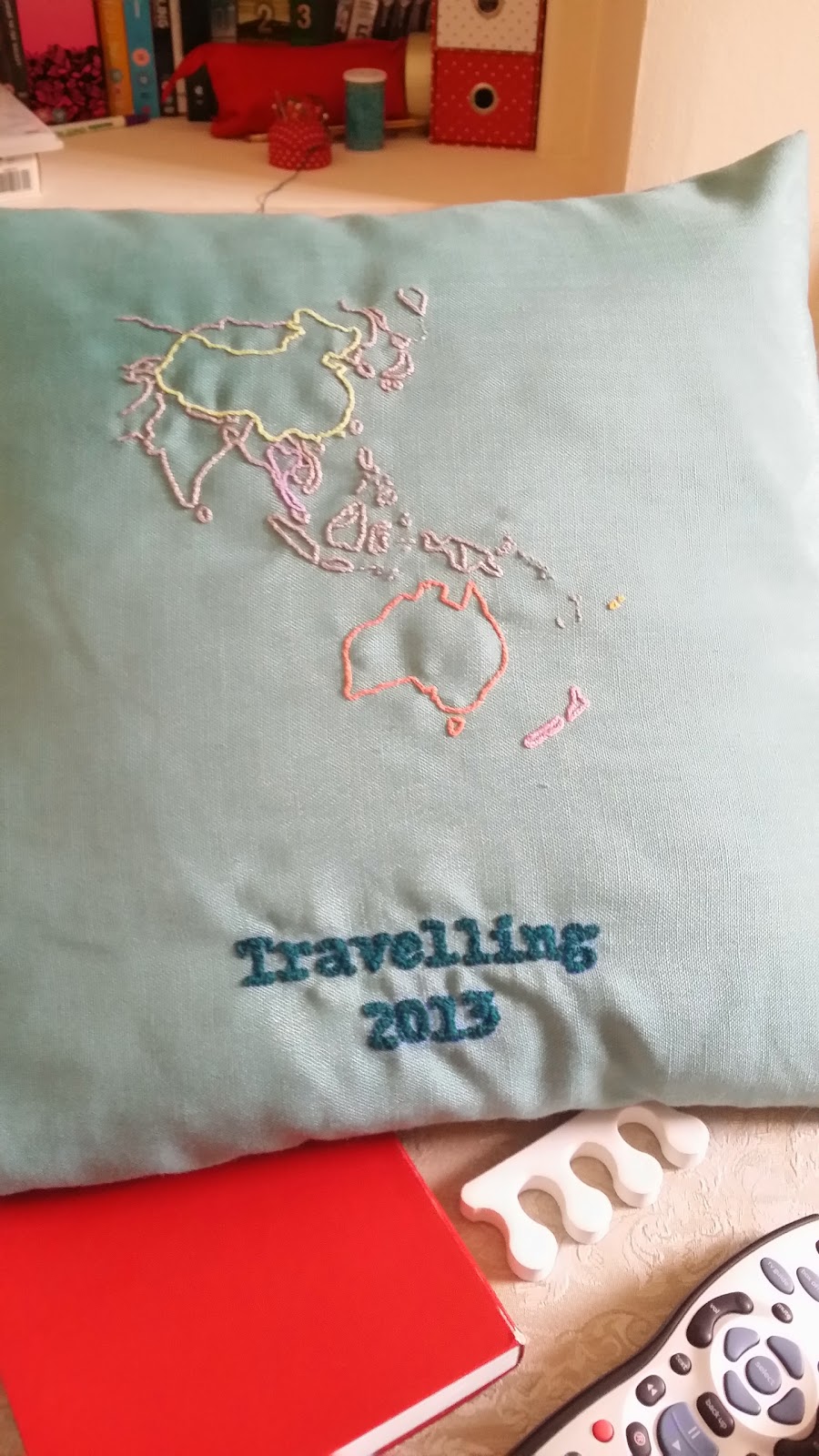 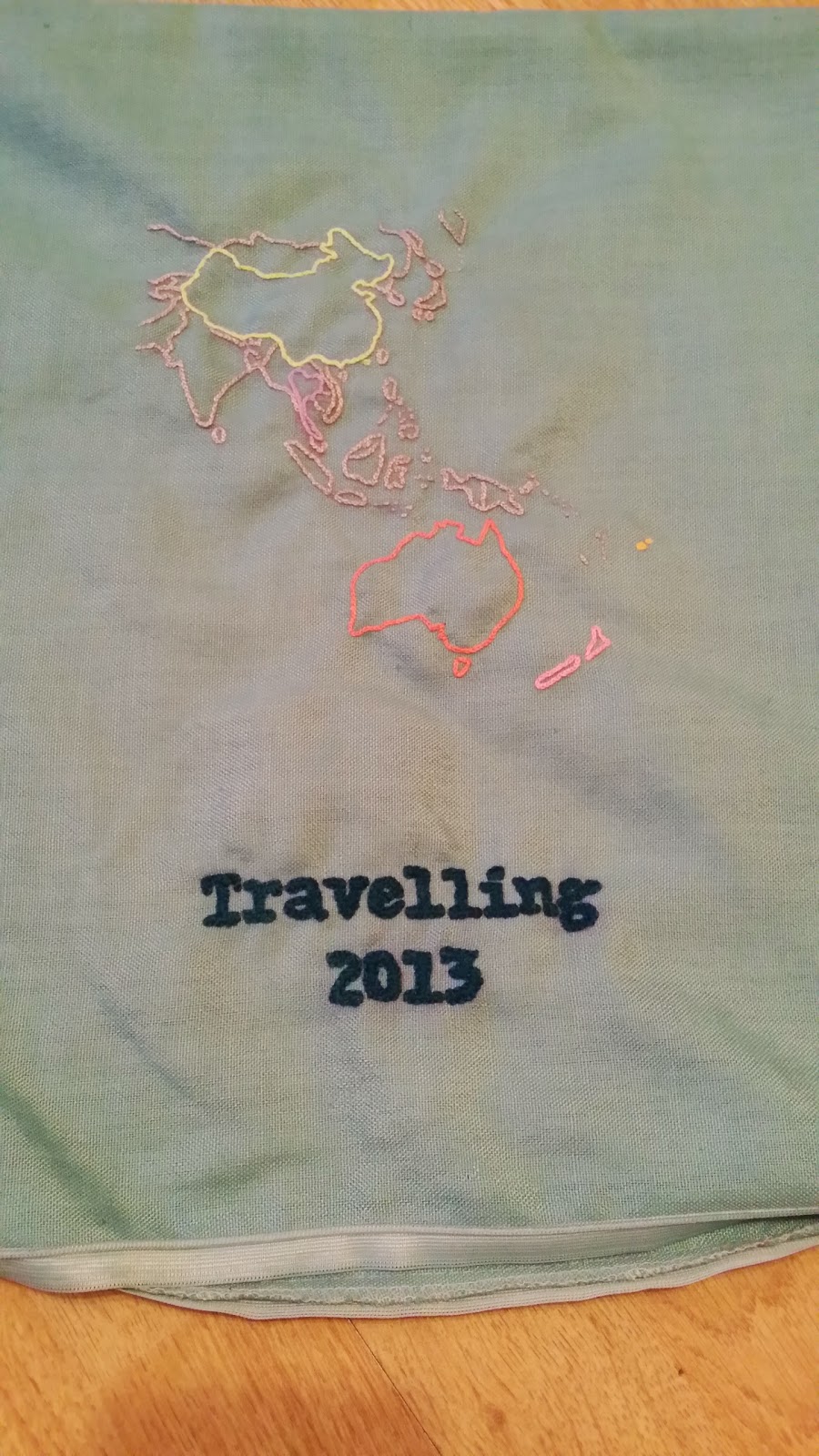 She travelled to Thailand, China, Australia, New Zealand and Fiji so I did them all in their own colours and then just did all the other countries and borders in silver. I then finished it all off with the teal lettering at the bottom.

I started by actually finding a map I could use that was small enough to fit on the cushion but large enough to make it possible to sew. I finally found one and then had to sit looking at another map and make sure I marked off the right countries. I myself am pretty untraveled myself so wanted to double check. In the photo it looks very crinkled from lots of use. 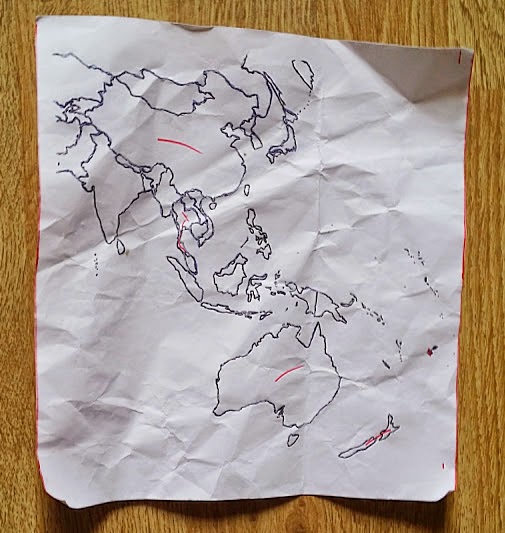 Then I had to transfer the pattern onto the cushion cover. I already had some tailors transfer paper and decided to use the white one because I didn't want to end up marking the cushion, however I made the mistake of not testing it in a corner to check that it would show up. This meant that I traced the whole thing and then realised that it hadn't worked. I then went through the other colours and found that the red one showed up and so traced it with that. 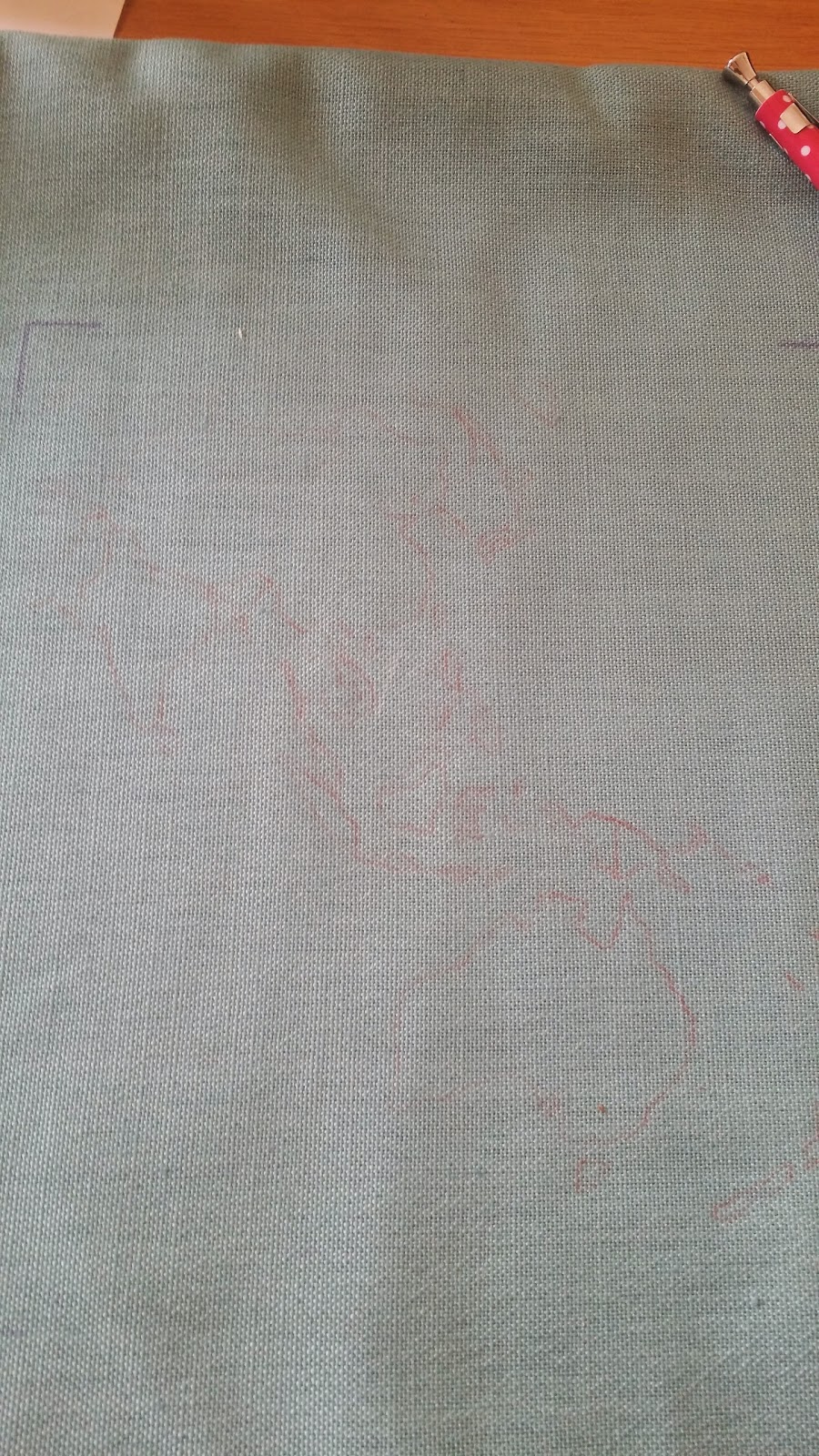 It came out quite faint and its pretty difficult to see in this photo, but it gave me an outline which I then drew over with my purple fabric pen, I did remember to test this on a little bit of fabric on the inside of the cushion to check it faded. Turns out the ink fades very quickly on this type of material, the reason the map is so creased is because I had to keep looking at it for reference and re-drawing parts of the map. 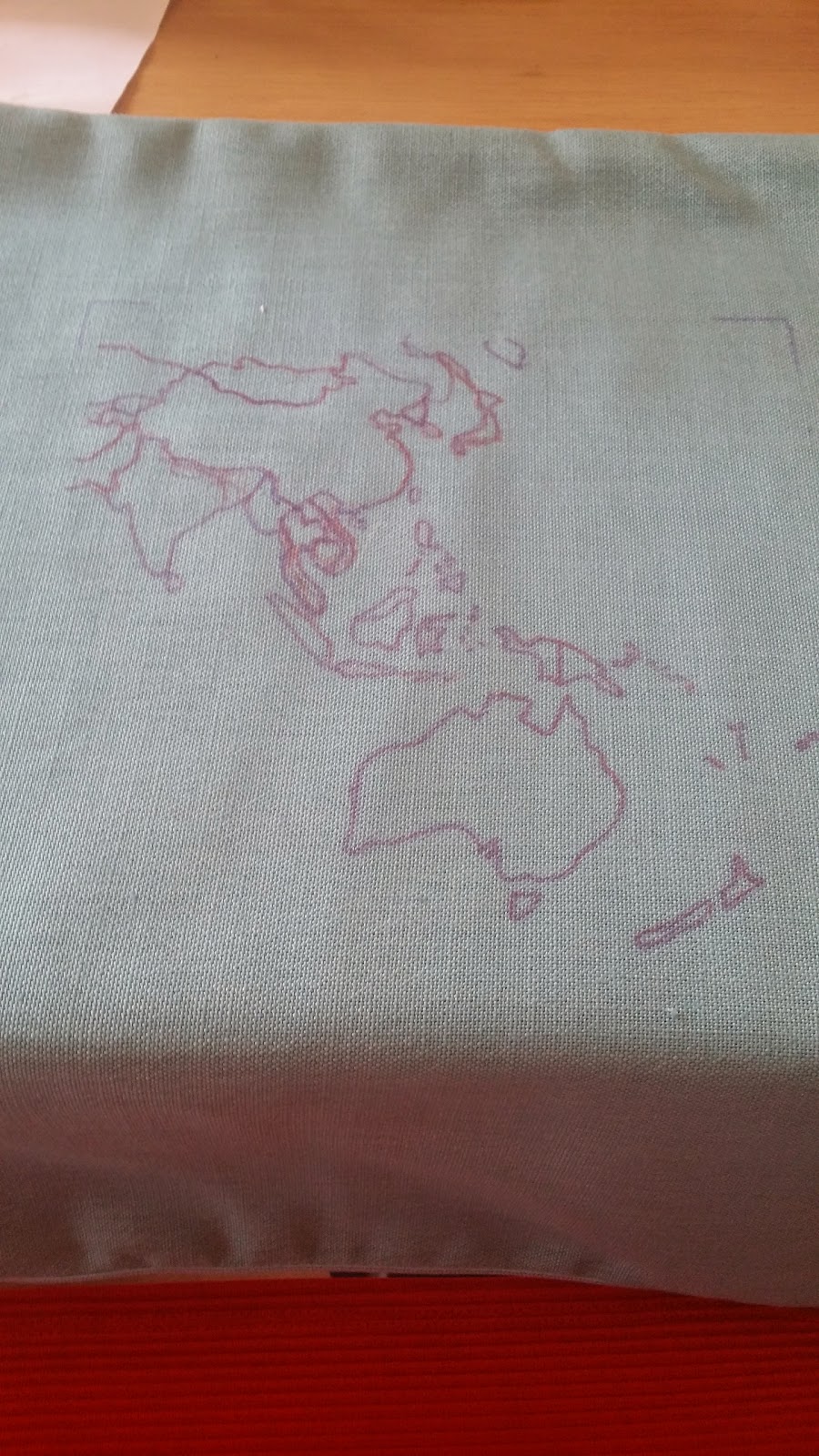 I began my stitching with Australia, I'm not sure why, perhaps because its not got any other countries touching it and therefore in my mind that made it easier. 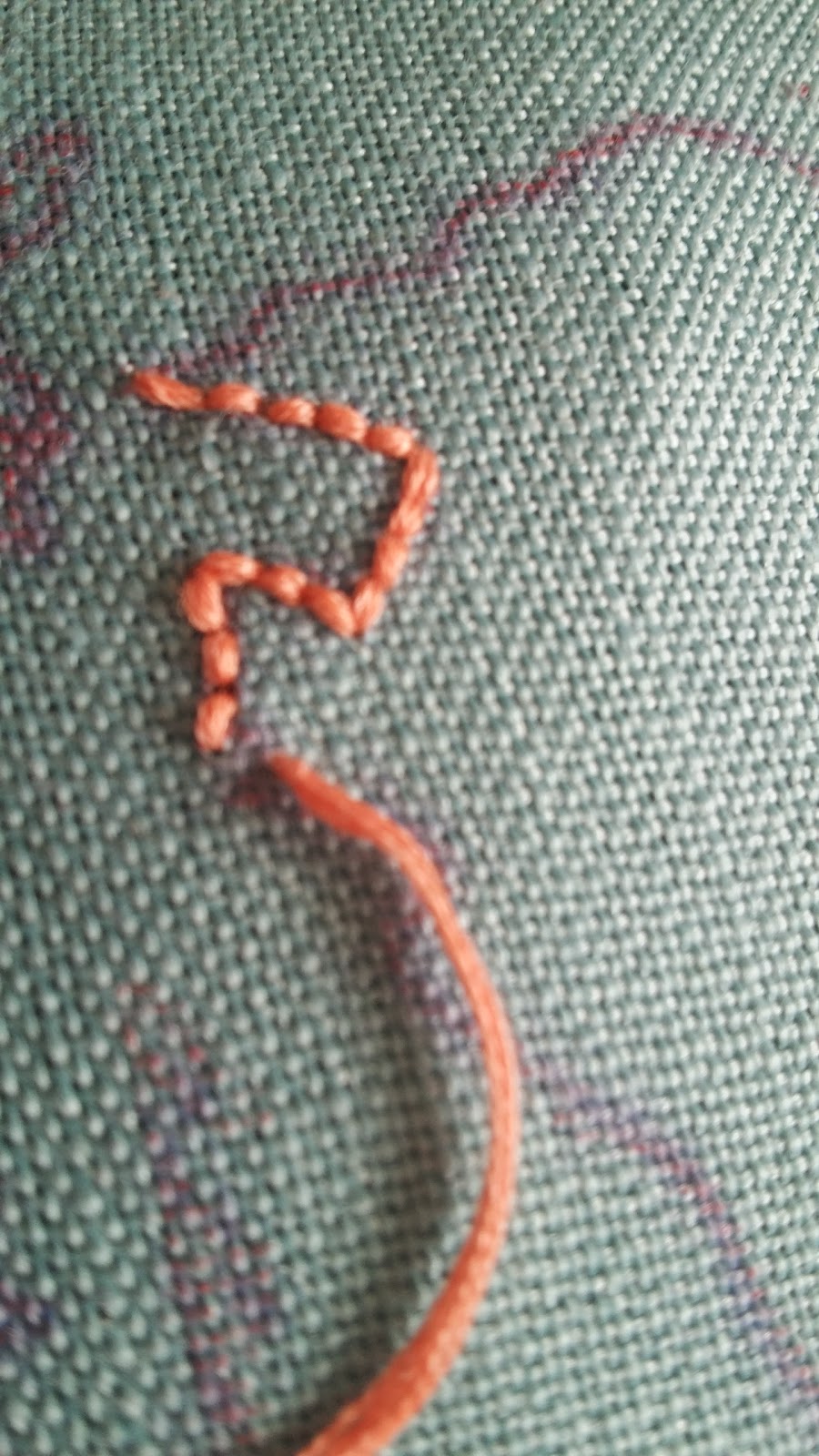 I then moved on to the chain stitch, which really isn't more difficult but I thought looked a lot nicer. 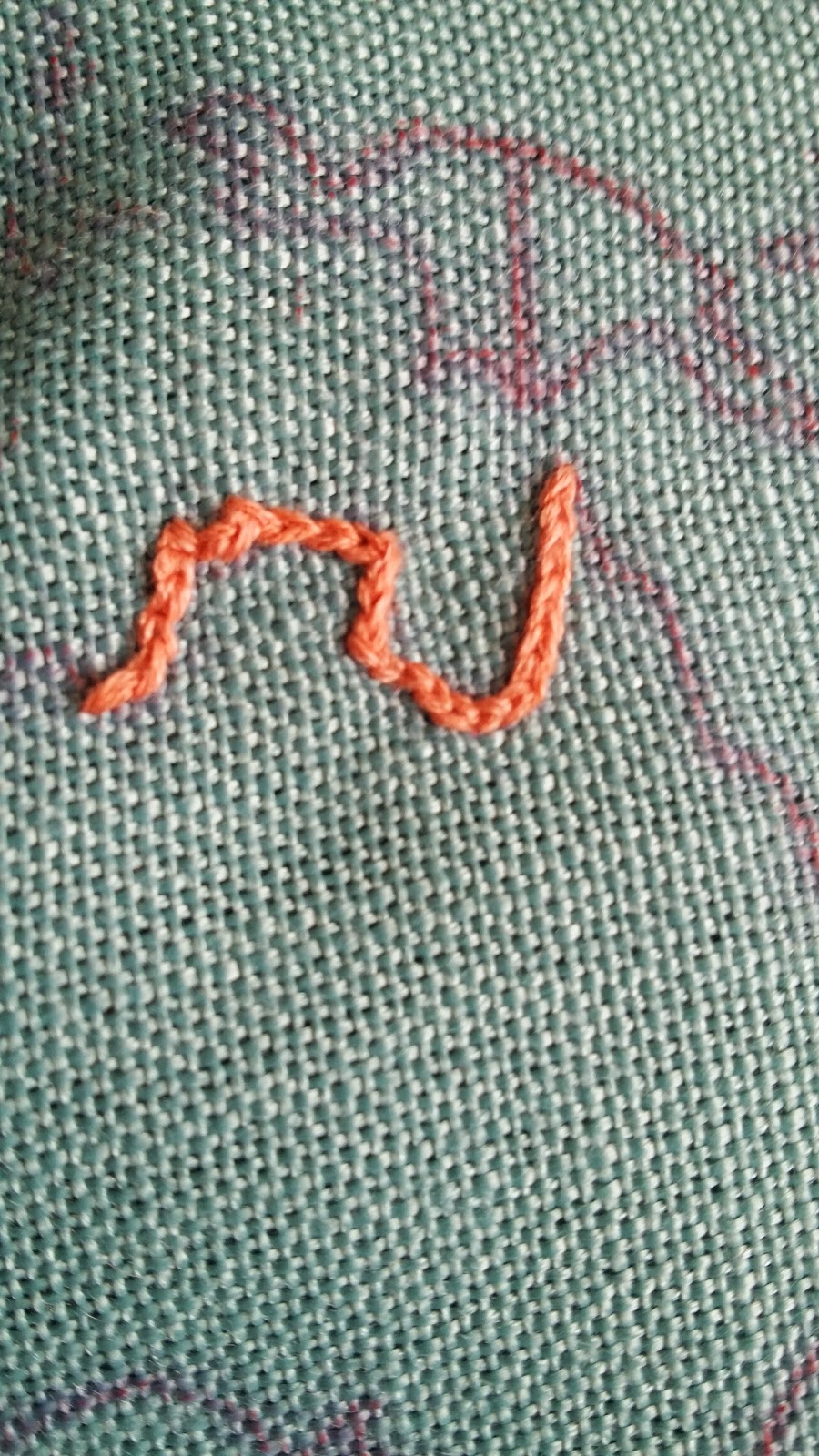 I finished Australia on the night that England were beaten by Uruguay, 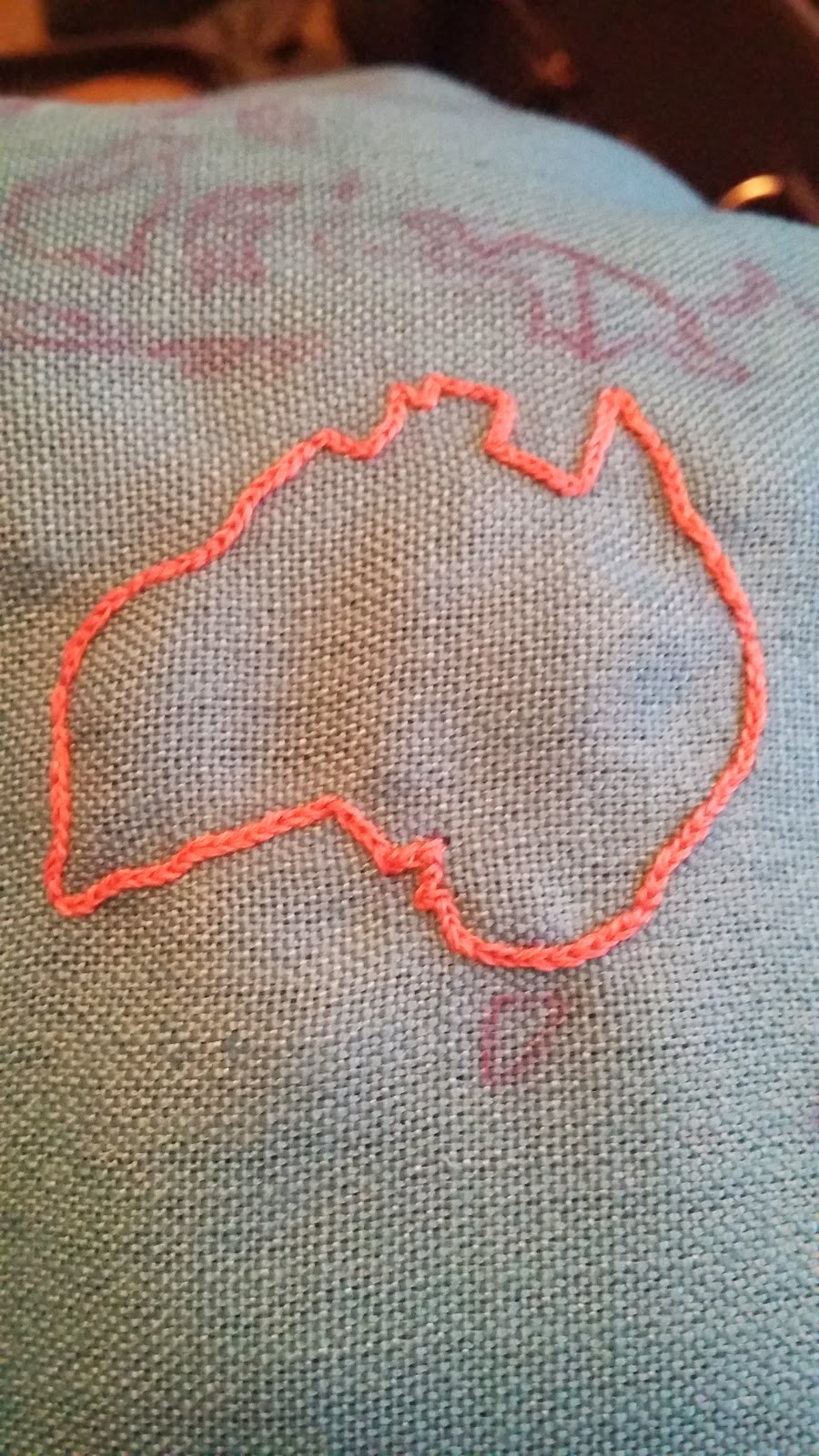 Or so I thought, it turns out that Tasmania is also part of Australia so I had to do that little island in Orange too. 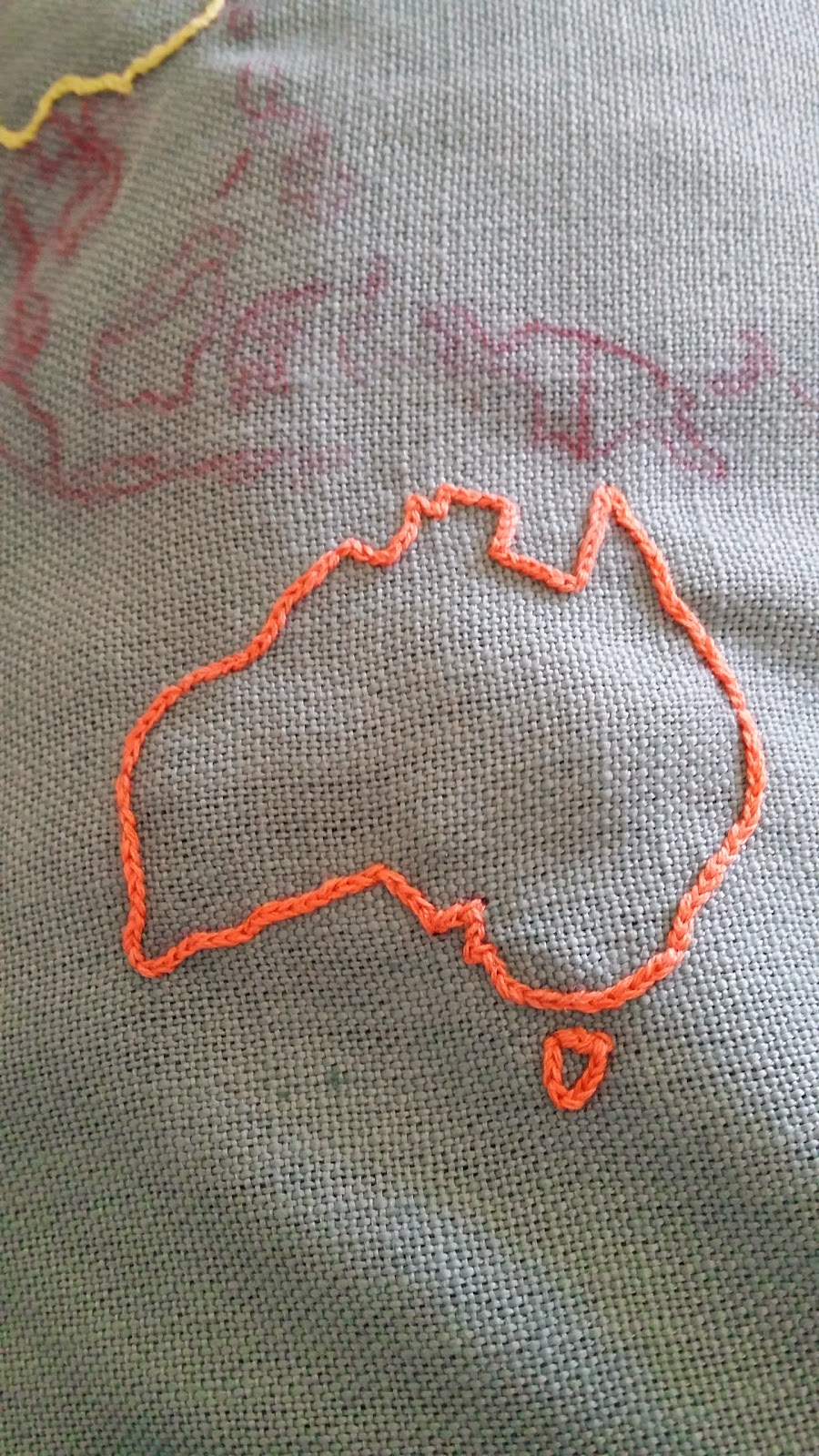 The next day I got lots of sewing done because the electrician came round and turned all my electric off, so he could fix some of the plug sockets in the house. I imagine he thought I was quite odd, sat across the room from him with my headphones in, sewing away. I next attempted China, it was the other big country and I'd already decided to do all the coloured countries first because I didn't want to accidentally sew part of one of them with the silver thread. 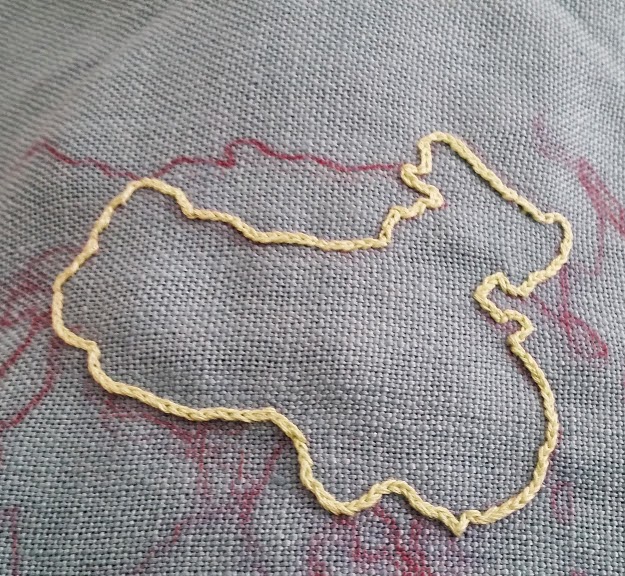 China was followed by Thailand 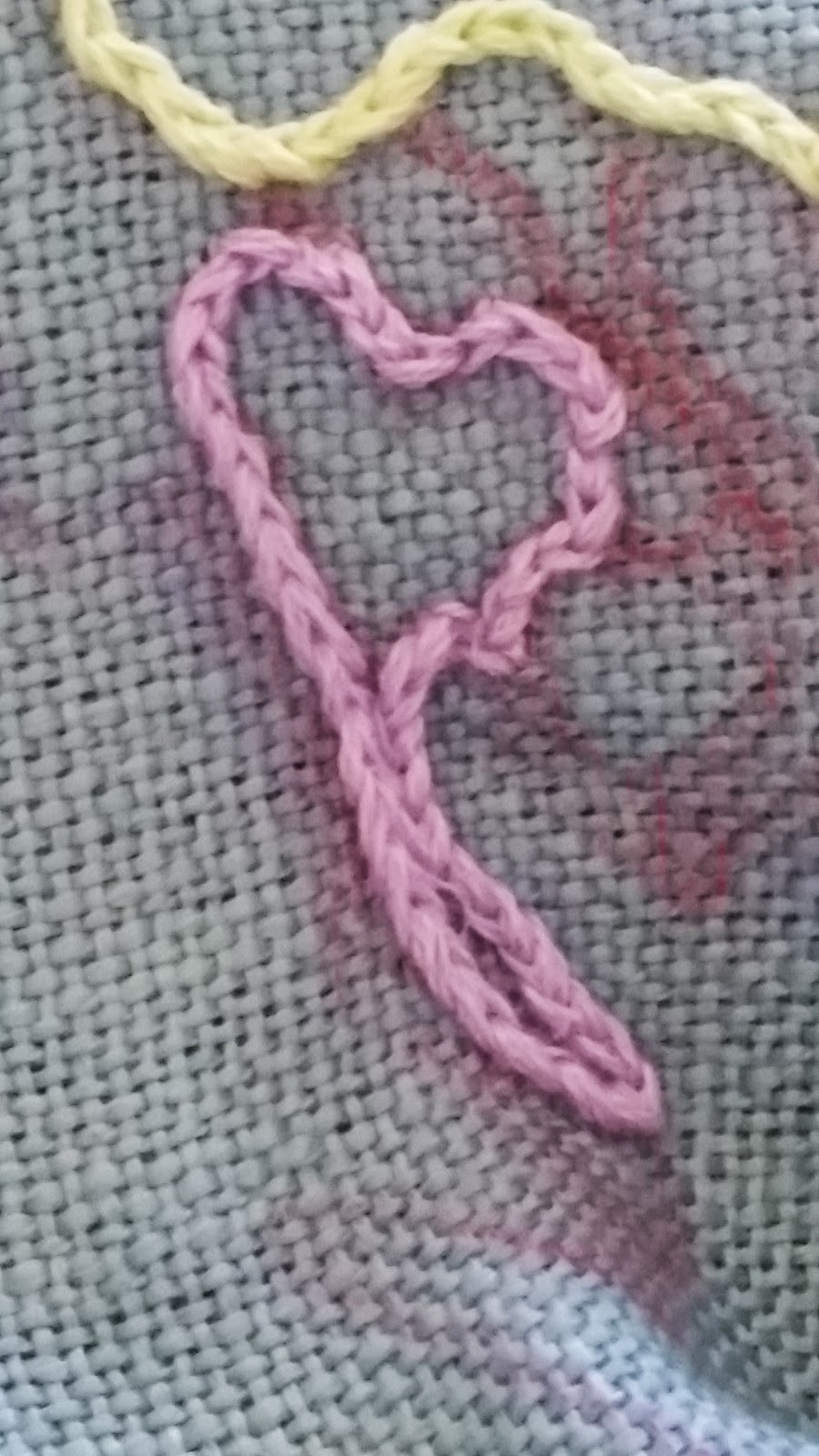 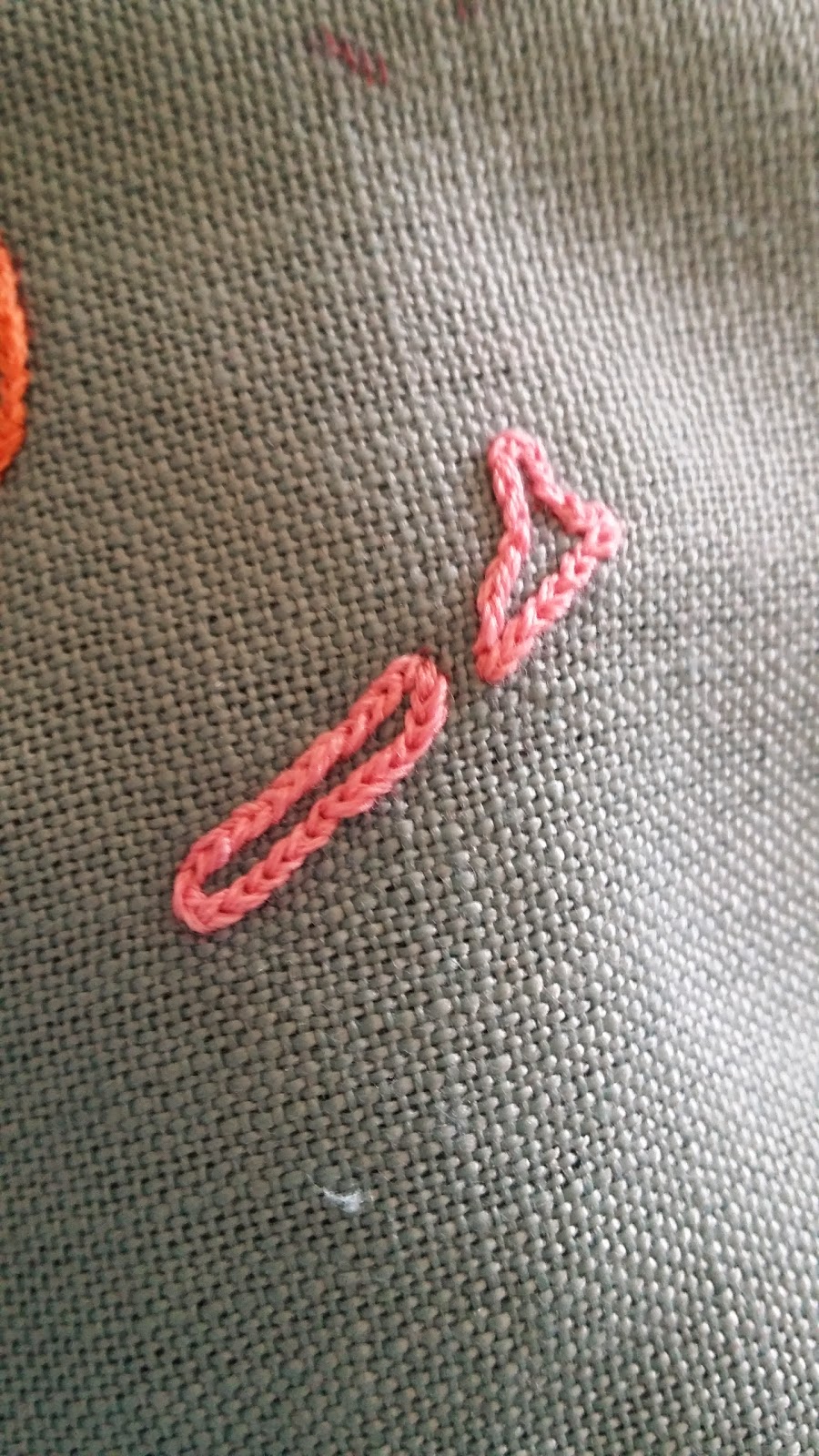 And last but not least - tiny little Fiji 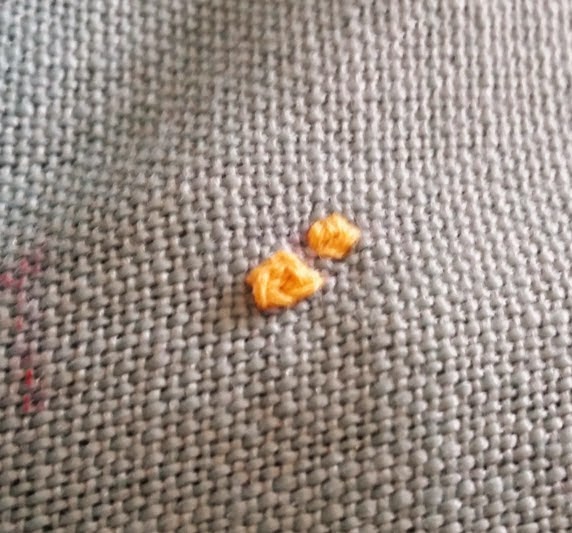 I then had to fill in the rest of the map. The reason I chose a silver thread was because I wanted something that would compliment the colour of the cushion but also not stand out too much. I wanted the main focus to be drawn to the countries she had visited.

This was what it looked like when all the countries were done! 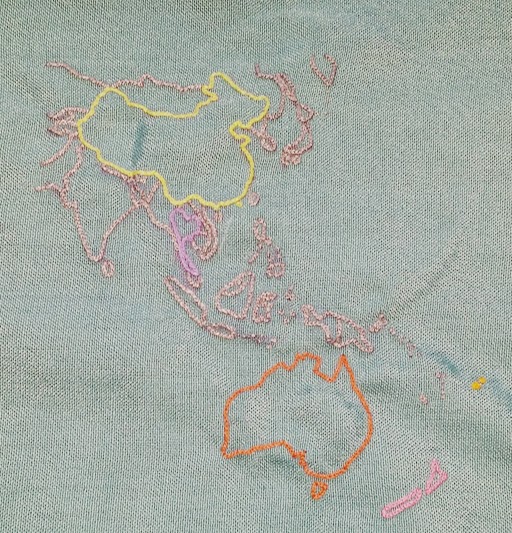 The next stage was to add the lettering to the bottom of the cushion. I decided to put "Travelling 2013" just in case she goes travelling again in the future...and I decide to make her another cushion haha.

I picked a font ages ago and began to doubt my decision when I was trying to transfer it onto the cushion cover.

I stuck with the original back stitching to go around the lettering and then filled it in using satin stitching. This was the only point of my sewing where I started doubting myself and wondering whether it looked good enough. I think there is always a part of a project where I get very critical of myself. Maybe I should have more confidence in what I do because everyone has told me how good it looks.

And when the lettering was done it was finished. It's the first time in a while that I've done some embroidery and even longer since I've done such a big piece. I really enjoyed it, as much as I love crochet and all the amazing things it makes, hand sewing will always be my first love. 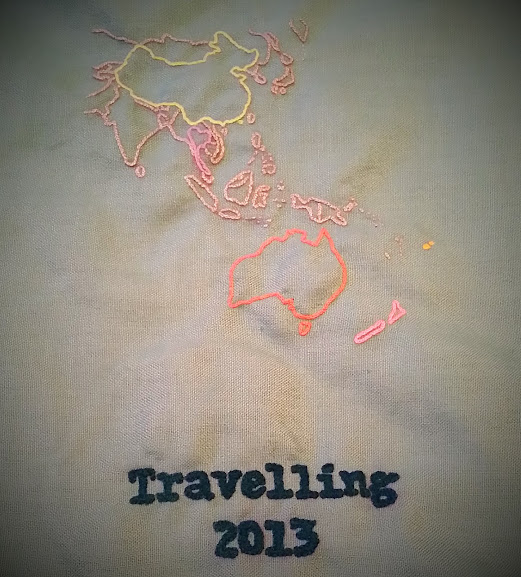 When it actually got round to giving this to Bekki I did start to feel a little nervous in case she didn't like it. It's not like you can pop a receipt in the bag so they can return it. However when I went into her room I saw this on my desk and I realised how silly I had been

This was what I made Bekki for her birthday last year. I spent hours devising a pattern for an amigurumi fox as it's her favourite animal and its right there on her desk. That's when I realised that she would have loved it even if it does have problems because I made it for her, and that the important bit. The fact that I put so much care into it because I was making it for her.It makes is special.

Now that the sewing is done I am going back to one of my many crochet patterns on my to do list. Trying to work out the kinks in my dinosaur pattern. As the picture below shows...it's going well!

My crocheting may slow down again because....I've gone back to work. Despite feeling no better at all and still having no diagnosis. I'm pushing myself to go back because I feel like staying at home by myself is really bringing me down. I get so bored! Fingers crossed for a speedy diagnosis and an even quicker cure!

Hope everyone has a lovely weekend x